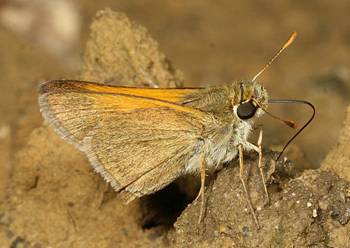 This winsome little skipper was first described by Fabricius in 1787 from a southeastern United States specimen; he named it Papilio taumas.  The description and name themistocles, bestowed by the well-known French entomologist Pierre Andre Latreille, were later given precedence. The type specimen from Latreille’s collection is thought to be in the Musée Nationale d’Histoire Naturelle in Paris (Miller and Brown 1981: 38).  Boisduval and LeConte coined yet another name, Hesperia cernes, in their 1834 treatise, probably basing their description on a drawing by John Abbot.

Thaddeus W. Harris was the first to report this species in Massachusetts. In a passage undoubtedly written about 1840, but not published until the posthumous 1862 edition of his work, he refers to a specimen he called Hesperia ahaton, saying “It was captured many years ago in Milton, and I have given it the name of an Indian from that vicinity” (Harris 1862: 318, Fig 140). Harris' Index gives the date of the specimen as 1831.  The Native American to whom he refers remains a mystery.

Samuel Scudder was quite familiar with Tawny-edged Skipper. and called it common. “In New England, as might be expected, it is everywhere common, from the White Mountains, and even from the highest peaks of the same, to the southern and eastern sea coast (1889: 1729).”  This does not mean that Tawny-edged was abundant; the only two skippers that Scudder describes as “abundant” in New England in 1899 are the Least Skipper and Peck’s Skipper.  Still, Tawny-edged was so common that Scudder does not give the usual list of specimens or collection locations. However, F. H. Sprague easily collected many specimens in Wollaston (Quincy) in June 1878, and in Belchertown in July and North Leverett in August that year (Sprague 1879). For eastern Massachusetts, the Harvard MCZ has many 1878-1895 Sprague specimens from Wollaston, West Roxbury and Malden, two 1880 specimens from South Abington (Plymouth Co.), and early undated specimens from Brookline and Milton.  For the Connecticut River valley region, there are Sprague specimens from Amherst (1885, 1886), Belchertown (1885), Deerfield (1885), Montague (1885), Palmer (1885) and South Hadley (1885).

Nineteenth-century Newton naturalist C. J. Maynard (1886) also called Tawny-edged “a very common Skipper.” It was probably more common than the closely-related Crossline Skipper.  As with many of the upland skippers, Tawny-edged Skipper's numbers probably increased with the spread of agriculture after 1600 (Table 1).

Tawny-edged is probably less common today than a century ago, due to the loss of open meadow areas as pre-industrial agriculture declined in New England after 1850 (Table 2).  Rick Cech makes this point well, writing that the reversion of open areas to woodlands, the loss of meadows to development, and the use of environmental chemicals may all have combined to make the Tawny-edged much less abundant in the northeast today than at the turn of the century (2005: 279).

The Tawny-edged has been called “the epitome of a meadow skipper” (Cech 2005). It uses a range of grassy habitats, and is often but not always found in moister areas, including wet meadows, stream edges, pastures, and power line cuts.  It is often seen at flowers or sipping moisture from damp soil (see photo above).  A century ago, Scudder found it frequenting  “open fields, meadows, roadsides, pathways and exposed sunny spots (1889: 1730).”

But unlike Peck’s Skipper, Tawny-edged Skipper is “not especially tolerant of heavy disturbance” (Cech 2005: 279); that is to say, it will not likely be found in recently plowed fields, frequently mowed areas, or manicured grounds and golf courses.

The Connecticut Atlas found an egg or larva of Tawny-edged in the wild on both Kentucky bluegrass (Poa pratensis) and little bluestem (Schizachyrium scoparium).  It is also known to use other grasses, mainly various Panicum spp. and slender crabgrass (Digitaria filiformis) (Scott 1986). Forbes, writing of New York state, (1960: 96) says that it "prefers Panicum." All these grasses except Kentucky bluegrass are native in Massachusetts, and all are common. As with Peck’s Skipper, the adoption of the widespread introduced Kentucky bluegrass goes far toward explaining this skipper’s relative success, although it is still not as abundant as Peck’s Skipper, which also uses Kentucky bluegrass. Tawny-edged is among those butterflies which have adopted new non-native host plants (Table 3).

The Tawny-edged may have one of the widest ranges of any meadow skipper. It extends from Nova Scotia across Canada to southern British Colombia, occurs in most of midwestern United States, and the whole of eastern United States south to the Gulf coast and part of Florida. It is apparently rarer in the southern part of its range.  Its particular host grass and preferred habitat undoubtedly differ in these widely differing locales, and a focus on local research is needed.

MBC records 2000-2007 rank Tawny-edged Skipper as Uncommon-to-Common (Table 5).  It has been seen more often than Crossline Skipper, about as frequently as Long Dash and Northern Broken-Dash, but not as frequently as Least or Peck’s Skippers.  It is not “Common” in the same sense as Peck’s or Silver-spotted Skippers are. The Atlas called Tawny-edged “common to locally abundant,” but in fact it was found in only 78 of 723 blocs searched, which would rank it as “Uncommon” (Table 5).  And it is hardly ever "abundant" at any one location.

The trend shown in Chart 93 is a small increase over this time period in numbers of sightings per total trip reports, although there are strong year-to-year fluctuations.  A different methodology, list-length analysis, applied to MBC data 1992-2010, similarly showed a statistically significant increase of 44.9% in detectibility for this species over this time period (Breed et al. 2012). 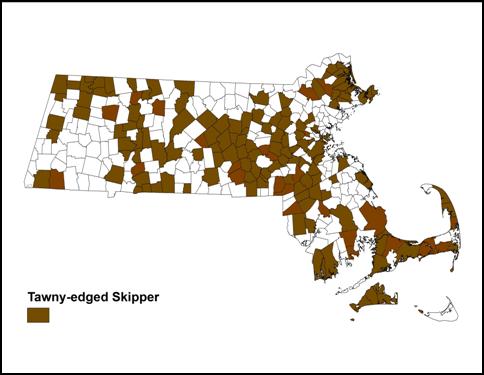 These records  fill in some spaces that were empty on the 1986-90 Atlas map. The species has been reported at least once from all of the NABA Counts around the state. It is usually reported in varying numbers from the Northern, Central and Southern Berkshire Counts; from the Central Franklin (nearly every year), Northampton, and Lower Pioneer Counts; from Northern Worcester and Blackstone Valley, and from all the eastern Massachusetts counts, including Cape Cod and Martha’s Vineyard.

Tawny-edged Skipper may have increased on Martha's Vineyard since the 1930's; Jones and Kimball (1943) reported it as only "occasional" on that island, and there appear to be no museum specimens. Today, the Vineyard checklist (Pelikan 2002) ranks Tawny-edged as “Common."  On Cape Cod,  Mello and Hanson (2004) say it “regularly occurs," and BOM-MBC has many Cape Cod reports.  For Nantucket, there appear to be no specimens in the Maria Mitchell Museum, or other museums, and Jones and Kimball did not report it from the 1940's, but local observers think that it probably will be found, especially given the 2011 report from Tuckernuck (LoPresti 2011).

Tawny-edged is not usually found in large aggregations, though numbers can build up by late summer. Even at some well-scoured and usually productive locations, such as Broad Meadow Brook in Worcester or Great Blue Hill in Canton, observers have found only a maximum of 5 on any one day. On the other hand, the skipper sometimes turns up at unexpected spots, like Boston Nature Center in Boston.  Counts from “around the town” can run into double digits.

The following is a selection of high counts from discrete locations, and other significant reports:

According to MBC 1993-2008 records, Tawny-edged adults are seen from mid-May through the third week in September, with occasional stragglers into October (http://www.naba.org/chapters/nabambc/flight-dates-chart.asp).   Peak numbers are seen from 4th week in May through 2nd week in June, and again from 4th week in July through 3rd week in August, indicating at least two broods. But statewide there is not a sharp break between broods, and the skipper seems to be always flying somewhere throughout the season.

This skipper is bivoltine through most of its range, except the far north. Mello and Hanson (2004) say that a lack of August records on Cape Cod means it is single-brooded there, or has only a partial second brood in some years. However, there are now several August reports from the Cape, for example, 9 on 8/23/1997 Bourne, A. Robb, and 2 on 8/23/2011, Sandwich, J. Dwelly.

There may be a trend toward earlier spring emergence and later fall flight compared to a century ago.  In 1889 Scudder wrote of Tawny-edged Skipper that “The first generation makes its appearance in Massachusetts during the last week in May, usually between the 20th and 25th.  In a week it becomes abundant, and by the middle of June most specimens are badly rubbed; a week later it begins to diminish rapidly, and yet a few specimens may often be found throughout July. (1889: 1730).

In the 23 years between 1991 and 2013, there are six years (listed above) in which the first sighting of Tawny-edged was earlier than Scudder’s date of May 20. But in another eight of the years, the first sighting was between 5/20 and 5/25, in accordance with Scudder's dates. So there may be a slight trend toward earlier onset of the Tawny-edged flight.

Recounting Tawny-edged Skipper's life history, Scudder continues "Early in June the females begin to lay their eggs, and continue to lay them until the middle of July. The second brood of butterflies, which is generally less abundant than the first, appears near the end of the first week in August, sometimes during the last week of July, becomes abundant in about a week, lays its eggs at least from the middle of the month onward, and continues on the wing until the latter part of September; the caterpillars from these eggs probably change to chrysalis before hibernation.”...“ It is quite improbable however that larvae from eggs of the first brood laid as late as the middle of July, mature rapidly enough to reach chrysalis in time for it to disclose the butterfly the same season, and this will account for the scarcity of the second brood... (1889:1730).”

It is obvious that the recent "last sightings" are much later than Scudder’s “last of September." Last sightings have been in October in seven of the 23 years under review. The tail of the flight period appears to be extended. Also the second brood appears today to be more abundant than the first brood, rather than the reverse. Both these differences may be effects of climate warming.

Like all meadow skippers, Tawny-edged will be negatively affected by further loss of open meadow habitat. Meadow habitats also need to be managed correctly:  close mowing more than once or twice a year is detrimental.  Manicured grounds, sports fields, golf courses, and row agriculture do not provide habitat. (See MBC Conservation page http://www.naba.org/chapters/nabambc/butterfly-conservation.asp )

However, Tawny-edged has a wide continental distribution and is seemingly adaptable to a range of latitudes and host grasses. It already has two broods here; the possibility of a third should be investigated.  It may not be negatively affected by climate warming in our area (Table 6).  Its NatureServe (2010) status is S5 or secure, in Massachusetts, Connecticut, New York, and Maine, and S4 in Vermont and New Hampshire.