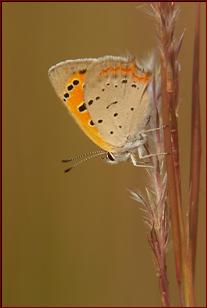 Ironically, our bright little American Copper may not be so American after all. Its two host plants in our area are both non-natives: sheep sorrel (Rumex acetosella) and Curly Dock (Rumex crispus).  It is found most often in dry, disturbed areas. Most writers view it as conspecific with the Flame Copper or Small Copper (Lycaena phlaes) of Europe, though a few prefer to designate it as subspecies ‘americana.”  It actually most closely resembles the Nordic or “polaris” race in Europe.  The species is holarctic, found northward to the Arctic regions in North America.  Opler and Krizek (1984) are probably correct in believing that the eastern populations of American Copper arrived here along with the European colonists. But some authors have demurred,  with Layberry 1998 seeing some visible differences from European specimens, and Glassberg 1999 pointing out that native butterflies have often quickly latched on to introduced plant hosts, finding them quite sustaining. To date, no DNA work has been done on this interesting question, although that should surely settle the matter.

A key problem with the “native” argument in the case of American Copper is that it is hard to imagine what this butterfly’s original host might have been: there simply does not seem to be a suitable plant available, at least here in the northeast. All other native Rumex species,   such as orbiculatus (used by the Bronze Copper) and verticillatus and salicifolius and maritimus, are wetland-associated plants.

Of the other plants mentioned by Scott (1986) as hosts, Oxyria digyna, mountain-sorrel, is a Eurasian   alpine found only on Mt. Washington in our area. It is used by American Copper in alpine areas in Canada (Layberry). And R. hastatulus, or dune sorrel, was introduced in Massachusetts, as was R. acetosa, or garden sorrel (Sorrie and Somers 1999). We may never know exactly how or when the American Copper arrived in the eastern United States; but its lack of native hosts, and concentration on a small number of Eurasian hosts in disturbed areas, led even Scudder to conclude that “It would appear more probable on general grounds that [our butterfly] originated in the Old World” (Scudder 1897: 209).

American Copper is on Thaddeus Harris’ list of butterflies collected in the Boston area 1820-26 (Harris n.d. "List"). He collected one specimen April 15, 1827, and another in Cambridge May 15, 1830 (Harris 1822-1850 Index Lepidopterum).  He knew the butterfly well, though it was apparently not “injurious” enough to mention in his 1841 report. He proposed to call it L. Americana, separating it from the L. phleas of Europe, but Scudder was more struck with the resemblance.  Both Harris and Scudder agree that it was “very abundant everywhere” in New England in the late 1800s, with Scudder describing three broods each year for most of Massachusetts, only one host plant (Rumex acetosella) as far as he knew, basking behavior, two parasites, and bird predators (Scudder, 1862; 1889:1008-9). Thoreau observed this butterfly in Concord on several occasions: on July 29, 1853, he counted ten on a single aster plant (Stichter 2009b).

In fact the American Copper in our area appears to use exclusively sheep sorrel. In 2009 searches in eastern and central Massachusetts, Sam Jaffe found caterpillars only on sheep sorrel; never on curly dock (Jaffe 2010).  The Connecticut Atlas also found it in the wild only on sheep-sorrel.  Both Rumex species are common and widespread; they are found in every county in Massachusetts today (Sorrie and Somers 1999).

As to habitat, Scudder (1889: 1004) wrote that ‘It is found most commonly in dry, sandy or gravelly, barren spots favorable to the growth of sorrel, and is particularly common by the side of paths in dry pastures or upland highways. It constantly invades the town, and, afire itself, seems to delight in finding the hottest places for its gambols.”

Today, American Copper is found in a great variety of disturbed habitats, especially abandoned fields, power line cuts, and railroad track rights of way.  But there are limits to how much hardscape this species can take, and converting disused railroad tracks to paved bike paths, for example, decreases habitat for this species.

American Copper undoubtedly benefited from forest clearing and agricultural development in the 1700s and 1800s (Table 1), and continued to thrive through the 1900s despite much suburban development, although it cannot survive in heavily hardscaped and landscaped areas.

According to MBC records, the American Copper is a Common species today, but it is not Abundant statewide to the same degree as the Cabbage White or the Clouded and Orange Sulphurs (Table 5).  The 1986-90 MAS Atlas also termed the American Copper “Common.” It was found in 169 out of 723 blocks, making it seem abundant, but it was somewhat less common in the western third of the state.

The Breed et al. (2012) list-length study of 1992-2010 MBC data showed little change in detectibility of American Copper over this time period. But MBC reports per total butterfly trips do show important yearly variations (Chart 14), suggesting that American Copper numbers rose between 1996 and 2000, and were lower before and afterward.  But this result should be treated with caution, since some of the localized population build-ups reported may have been over-estimated by enthusiastic observers. The records since about 1994 include several large estimates made on some NABA counts.

American Copper numbers are generally lower and more variable from year to year on the three Berkshire counts, and especially the Northern Berkshire count, than on mid-state and eastern counts.  In contrast, American Coppers always show up in very good numbers (100-200) on the Martha’s Vineyard NABA count, and usually in very good numbers (200-1500) on the Northern Worcester count.

American Copper has been found in 174 of the 300 towns for which the MBC has records (through 2009), and no doubt will be reported from most of Massachusetts' 351 towns.  It is distributed almost everywhere across the state.  As noted, among the various NABA counts, the highest numbers have been reported from the Northern Worcester, the Foxboro, and the Martha’s Vineyard counts, and by contrast the lowest numbers are usually reported from the three Berkshire counts. Mello and Hansen (2004) report that American Copper is common on Cape Cod, and can be seen “virtually anywhere that is not thickly forested.”

The American Copper has at least three overlapping broods, and is on the wing from mid-April to frost (http://www.naba.org/chapters/nabambc/flight-dates-chart.asp).  The largest numbers are seen in May, in July, and again in early September. The number of broods seems to have remained the same since Scudder’s day; he found it “triple-brooded throughout Massachusetts (excepting perhaps in parts of Berkshire), including the elevated towns of Andover and Princeton,” but changing to two broods just north of this state (1889: 1005).

American Coppers may be appearing earlier in the spring than a century ago, but better evidence is needed. Scudder says that for Massachusetts "the insect makes its appearance from May 10-23 according to the season."   He dismisses a March 15 capture date from Harris, and an April 3 capture date in Maine as exceptional due probably to unusually warm springs (1889: 1005; as noted above Thaddeus Harris also reports capturing one on April 15, 1827). However the peak timing of the first, second and third broods would appear to be similar to the late May/June, July, and late August/early September flight peaks described by Scudder.

The tail, or ending part of the flight period has probably lengthened since Scudder's time. Scudder says that the last brood “has generally entirely disappeared by the close of the month [September]” (1889:1006).  A century later, there are obviously many American Coppers now flying throughout October and into November.

The American Copper's continental range presently extends north to the tundra; it is not found in the hot southeastern and Gulf Coast states, except in the mountains. However, it is the most adaptable of our three coppers, and could be expected to withstand some climate warming in our region.

Although the American Copper is common, and likes dry, previously disturbed environments, this does not mean that it will thrive in all habitats.  It is not typically found in wetland areas, in manicured parks, or in hardscapes such as shopping mall plantings. Efforts to “clean up” waste areas, where its host plant sheep-sorrel can often be found (such as paving over disused rail lines), and efforts to eradicate all “non-native” plants in an area, can actually destroy habitat for this butterfly. American Copper also does not usually occur in frequently-mowed lawns.  Letting sheep-sorrel blossom and mature, and reducing field mowing to once or twice a season, will help this butterfly. Dense forests do not provide habitat, and may act as barriers to dispersal.  American Copper’s NatureServe (2010) status in Massachusetts is S5, or “secure.”